The performer brings up the topic of implanting ideas in someone’s head. To demonstrate, the mentalist removes their watch and has a participant select a time by twisting the knob to move the hands around at random. The chosen time is remembered and the performer’s watch is held between the participant’s hands. The performer’s head is genuinely turned away the entire time. Still, the performer can now discern the chosen time. Here’s where it gets crazy: to prove that the time and the watch itself was an implanted idea, the mentalist asks the participant to look at the watch again. There are now NO HANDS AT ALL ON THE WATCH. The hands…are just gone.

Predicting a chosen time is one of the strongest, impromptu-seeming effects one can do; it plays in a theatre full of people or impromptu at a table among friends. What “Timeless Deluxe” offers is an ending nobody will ever forget: the vanishing of the hands of a watch.

Included in the package is the watch itself–an attractive time piece you’ll be proud to wear. You also receive a special gimmick that accomplishes the method AND makes everything examinable at the end. The full video instruction and additional ideas are included in the package. 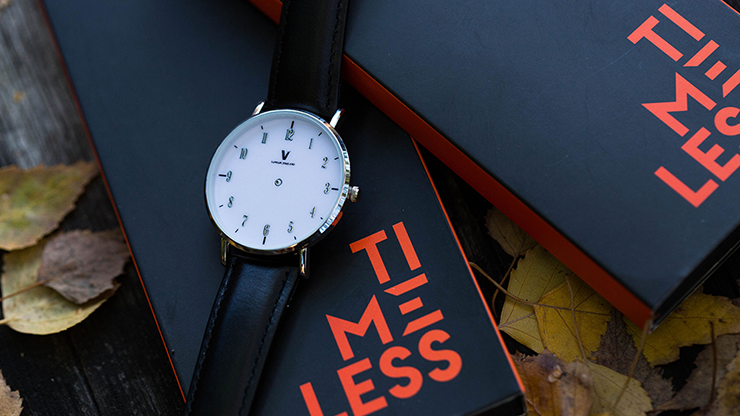 Timeless Deluxe by Liam Montier and released by Vanishing Inc. Magic is a superb gimmicked watch that first creates an amazing mentalism revelation effect and then continues into an astonishing mind and imagination manipulation effect. The simplicity of Timeless underscores the myriad of powerful and entertaining effects possible with this incredible clever watch and principle.

Timeless was first released to the magic community by Vanishing Inc Magic in 2010. I purchased it then and it soon become one of my favorite effects. Vanishing Inc Magic has now re-released it, now calling it Timeless Deluxe.  There are two versions. The first version comes with a classic black strap with a large, classy white faced watch. The other version called The Patriot comes with a red, white, and blue strap that is more casual looking. I prefer the classic black band. The watch comes nicely packaged in a sleek, modern looking box. Along with the watch, another item is included to be used for the effect. This other something is not gimmicked in any way and is readily and easily found. The watch is lovely and is an improvement over the original watch.

This is an amazing and entertaining routine and super easy to do. The instructional video is 16 minutes long. Do not be fooled by the shortness of the video. Andi Gladwin, co-founder of Vanishing Inc Magic, does a fabulous job performing the routine in a real, outside performance, and then thoroughly goes over all of the details and subtleties of the routine, handling, set up and tips. In fact, listen to the tips as they are extremely informative and helpful. There is, however, one important subtlety that while Andi does briefly address it, he does not show this important subtlety that Joshua Jay does in the original demo of Timeless. Here is a link to the original Timeless performance by Joshua Jay. The subtly is towards the beginning. When you watch the instructional and performance video of Timeless Deluxe, you will see what I mean.

The instructional video also includes an extra, bonus routine using three spectators. This routine is an excellent idea, but it is meant strictly for stage. The methodology is simple, direct, and clever. There are no electronics. There are no mechanisms to break. The reset takes about 10-15 seconds. You can do this effect strolling. While Andi does say he can do the reset while his back is turned while strolling, that is certainly true, I would be more comfortable to go to a quiet corner and do it. There is one extremely easy “move” that needs to be done to perform the effect. It is really not even a move. It is more of a minor action. A 6 year old can do this “move.”

This is a wonderful effect. You can make the effect as a magic effect, as a mind reading effect and/or as a hypnosis/influence effect. You can even use it to force a time or numbers for a book test. The main effect is great. The watch is beautiful. It is simple, easy. But please do not let the simplicity of the effect fool you. You will need to be convincing in your performance and actions. This watch almost does the effect for you, but you need to bring your personality into it. That is why I like it so much. Timeless is about time. But it is also about the illusion of time. It is about what is real. It is about what is imagination. It is about how reality can be influenced, manipulated, and then taken away.

Do not simply make Timeless as the mere vanishing of watch hands. The beauty of Timeless Deluxe is that it is a blank canvas waiting for the hands of an artist to bring forth the beauty and colors of a magnificent, magical landscape. Yes. You can simply show a watch with hands and then make the hands vanish with a simple snap of the fingers or with the utterance of a simple “abracadabra.” Please do not do that. Elevate your magic and mentalism to new heights. This is the perfect performance piece to allow you to explore and elevate your performance and acting abilities and to create a beautiful, amazing, artistic mentalism piece imbued with the power of influence, imagination and a story of the fragility and illusion of reality.

Timeless Deluxe is timeless in that it is a classic piece of mentalism that is truly limited only by your imagination. Use it to its fullest extent. Let it inspire you. Use it to inspire your spectators and to take them into and beyond their own imagination.  Even though it is not a new trick, I think it is one of the best tricks so far of 2020. I highly recommend Timeless Deluxe.10 out of 10 lucky charms. 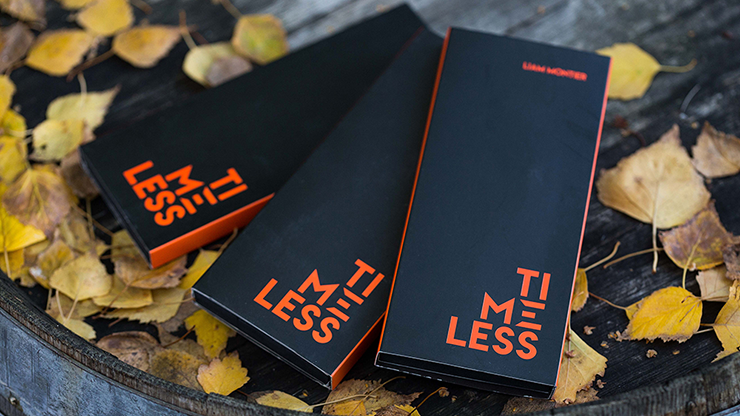 Review: The Monographs – A comprehensive manual on all you need to know to become an expert Deductionist by Ben Cardall

Have you ever want to be Sherlock Holmes? I do, I would like to have his powers of deduction and memory. In this book The Monographs you will find all of the answers how to become a real life Sherlock…